Saint Patrick And The Easter Fire

In 432, Saint Patrick, the Apostle of Ireland, arrived on the Emerald Isle to begin his work of evangelizing the Irish. Upon his arrival, he discovered that his competition for the souls of the people would come from the pagan druid religion and their priests. St. Patrick's struggle with the existing pagan priests truly began with one rebellious and bold act that reverberates throughout history.

During the Druid springtime fire festival known as Beltane, there was a ritual where the pagan priests commanded that all fires in the land be extinguished under threat of death. The pagans would then light a fire called the High King's Fire, from which all the other fires would be relit.

Because this pagan festival occurred at the same time as Easter, St. Patrick seized the opportunity and climbed the hill of Slane and built an enormous Easter bonfire that could be seen for miles around. The infuriated High King sent soldiers and chariots to kill Patrick and put out his fire. But the soldiers were unable to extinguish it and the light of Christ truly dawned on Ireland.

In thanksgiving to God for this initial victory in his mission, Saint Patrick wrote an amazing prayer called the “The Breastplate of Saint Patrick,” also known as “The Lorica.” To download a free prayer card of this prayer, please click below. 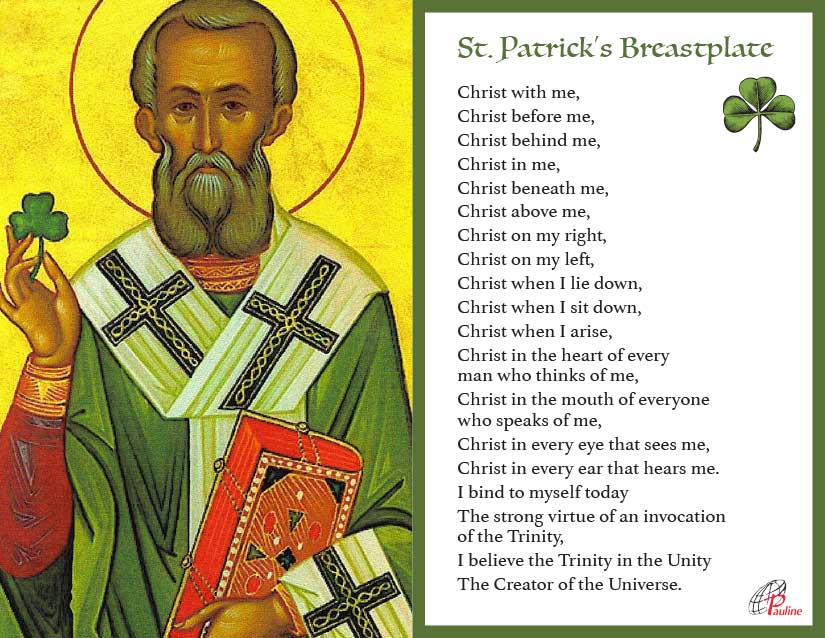 If you want to teach the incredible story of Saint Patrick to your children, so that the light of Christ he lit continues to shine in their hearts, Pauline Books and Media publishes two amazing books about Saint Patrick’s life specifically written for children.

Patrick and the Fire

Join a young Irish boy Bevan as he meets St. Patrick and learns about the Holy Trinity, shamrocks, and the unquenchable fire!

The Wolf and the Shield: An Adventure with St. Patrick

The story of a young hunter boy named Kieran who meets Saint Patrick and rescues a wolf pup and must choose between his old life and a new one.

To get the free prayer card of Saint Patrick’s Breastplate and to learn more about our special children's books about Saint Patrick from Pauline Books and Media and the Daughters of Saint Paul, click the button below!